Your yachting experience through Isthmus canal & Rio Antirio Bridge on the way to Ionian is the perfect time to soak in the magnificent view and enjoy the extraordinary experience! Take a closer look at the Isthmus Canal and Rio Antirio Bridge to appreciate the art & engineering together. Together they will give you a once in a lifetime experience, stories to tell and memories to cherish. 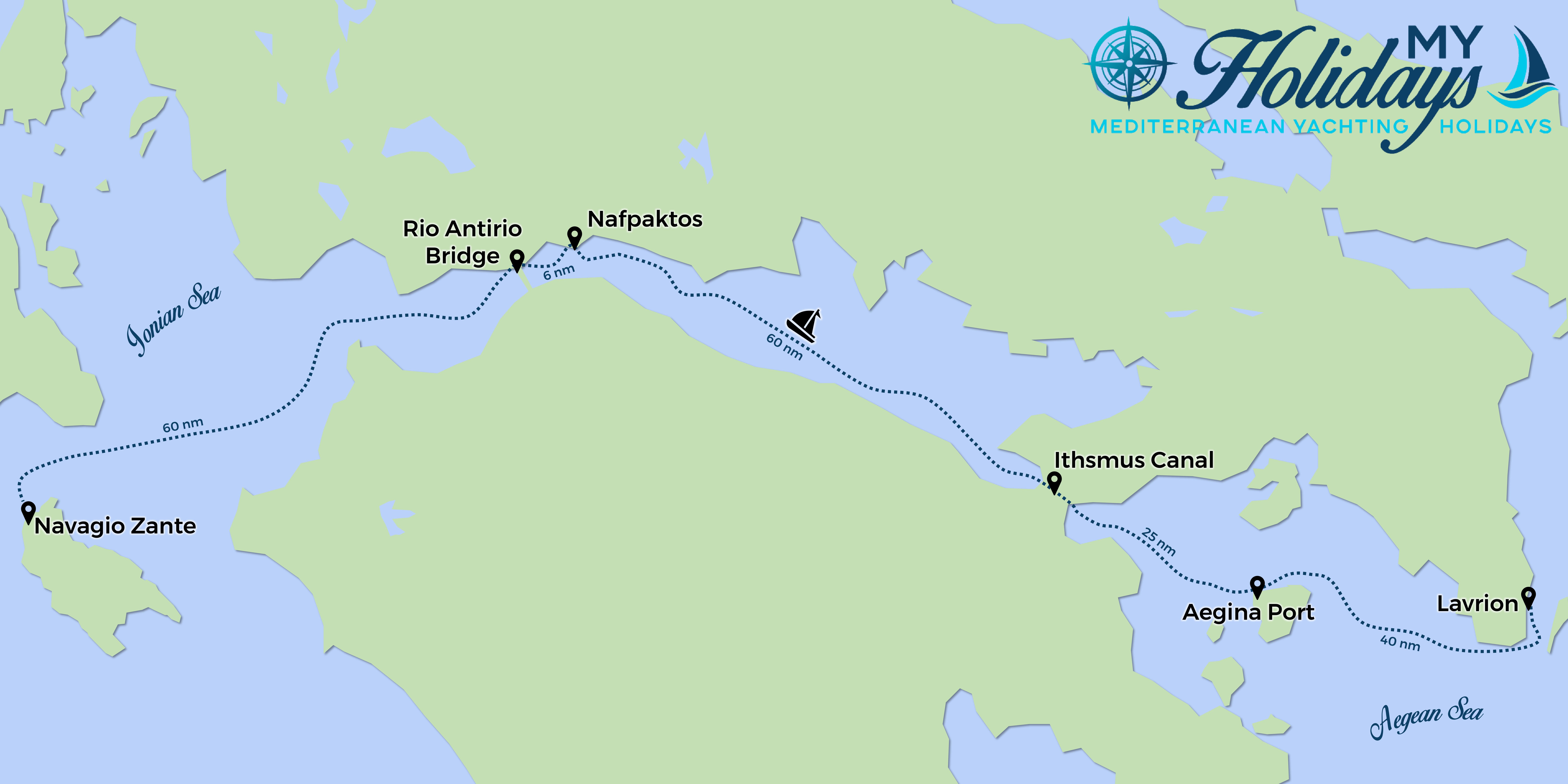 Your starting point to the yachting journey through Isthmus canal & Rio Antirio Bridge on the way to Ionian sea is the port of Lavrio or Alimos in case your prefer this Athenian port of departure. The charming and quiet port of Lavrio retains a sleepy atmosphere despite its commercial & private yachts traffic in recent years. A good time to start your yachting is to check in at 5 pm & start exploring Lavrio. Before you could start your journey sit back, relax, and enjoy cocktails at the many bars in the area & the food from several restaurants that tickles your taste buds.

Just 40nm away from Lavrio is Aegina island that served as Greece’s capital from 12 January 1828 to 3 October 1828.The rocky composition of the island has narrow pebble beaches at the bottom. You can spend an overnight where you can disembark for dinner at one of the many taverns on the waterfront, or get your meal packed to enjoy onboard.

Aegina is famous for the production of the pistachio nuts. Because of it’s low rainfall and the mild climate it has been famous as a summer resort among the prosperous citizens of Athens. Aegina harbour and marina remain crowded even during the weekends and there is often no space in the marina during the sailing season which is filled with the local yachts. Make sure your anchor holds well.

When in Greece with a yacht , an unforgettable experience is to sail through the Corinth Canal, “Isthmus” as it is commonly known in Greece.

Navigating through the 6,343 metres long by 24.6 metres wide Isthmus canal of Corinth saves the 700-kilometre (430 mi) journey around the Peloponnese and is the shortest route for a yacht departing from Athens marinas to Ionian sea magnificent islands. In essence, Corinth Canal separates the Peloponnese from the Greek mainland, arguably making the peninsula an island. Crossing Corinth Canal avoids also exposing the yacht to the fiercely blowing winds at the south end of Peloponnese peninsula.

By navigating through the canal, the sailors cut it short and have a breathtaking experience of transit. Experience of crossing Isthmus Canal with your own yacht is definitely one of those moments you will enjoy the most. Every minute of the 30 to 45 minutes needed as a whole procedure to cross the canal will be a lifetime experience. 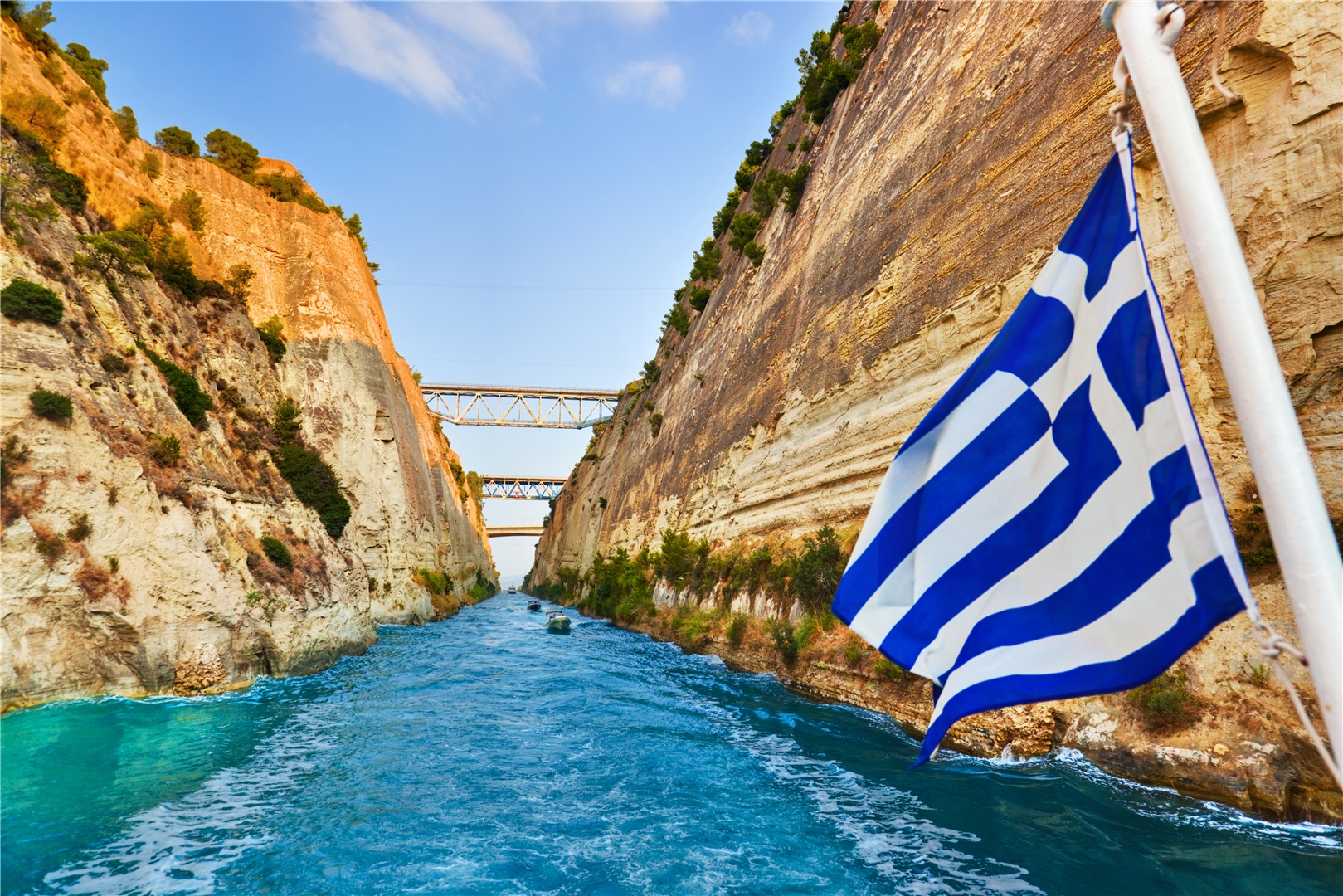 The 8 bridges that cross the canal include 3 bridges, a railway bridge, 2 road bridges and 2 hydraulic bridges. The hydraulic bridges are at both ends of the canals that are lowered down into the water, shortly before transiting.

The canal of the Isthmus of Corinth is one of the most important projects of modern Greece, which played a major role for the Mediterranean trade. It remained an inspiration for over years and was completed 25 centuries after the conception of its idea. The canal was initially proposed in classical times and a failed effort was made to build it in the 1st century AD. Main purpose was try to open a canal in the isthmus of Corinth which would allow the avoidance of a dangerous circumnavigation of the Peloponnese and to shorten the route. 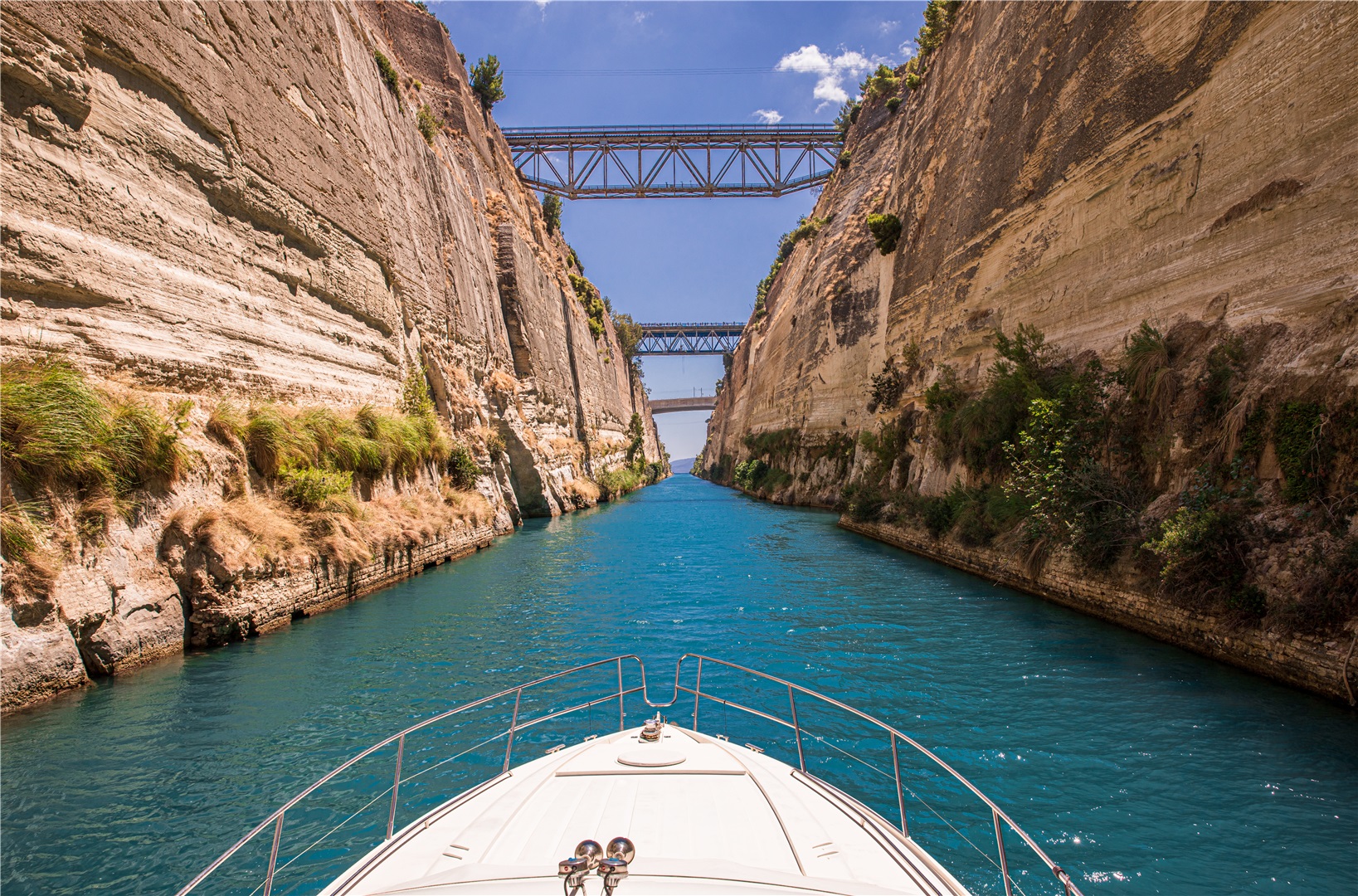 However, efforts were abandoned due to lack of adequate technology at that time. In ancient times the people used to drag their ships across the isthmus on a paved road, which they called diolkos. The name “Diolkos'' means a “movable platform.” It may sound unbelievable, but you can still find preserved parts by archeologists of the paved trackway near Corinth which enabled boats in ancient Greece to get out of water and be moved across the Isthmus of Corinth by pulling them. Not all ships could use the “Diolkos'' due to their size, but in many cases, the cargo of ships was taken off at one side, and transported to the other, where a second ship would be waiting to load on the cargo. Construction recommenced in 1881 but was hampered by geological and financial problems that bankrupted the original builders. It was completed finally in 1893. 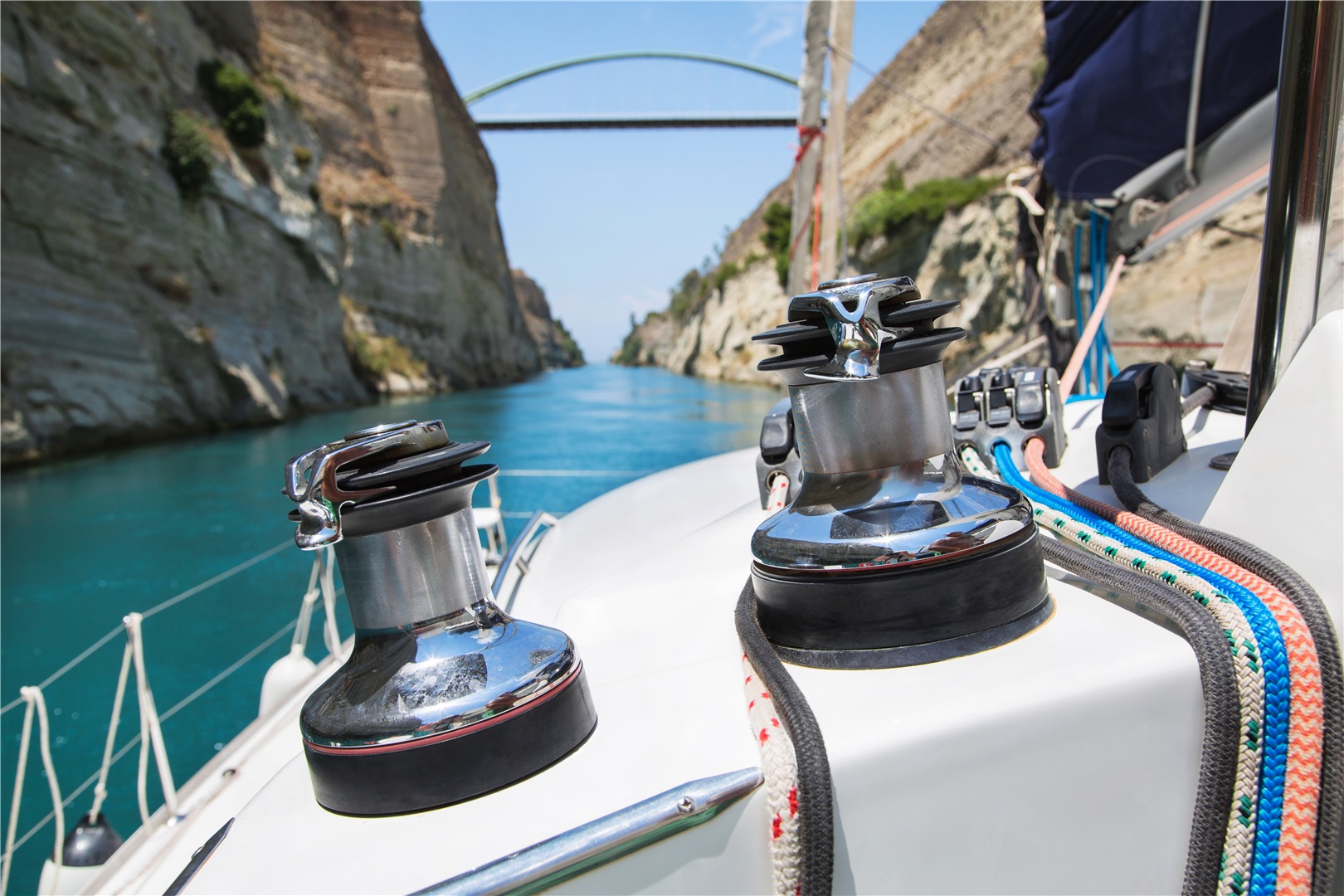 The Corinth Canal connects the Saronic Gulf with the Corinthian Gulf. When sailing through the Corinth Canal make sure you keep a good distance off the shore. The Corinth Canal is too narrow for ships to pass each other, since it is about 25 meters wide. So you must get permission to proceed from the Canal Zone authorities as it is considered a one way seaway and yachts have to wait usually for 10- 20 minutes in order to pass as a convoy all together.

As you pass through the canal you will fall in love with the amazing shades of emerald and the rocks with their sprouting bushes, pines rise imposingly at 70 meters.

Enjoy the breathtaking views of the canal and explore every corner of Corinthia when going through. You will enjoy the sailing experience if you maintain enough speed to have complete control of your yacht but resist the urging of the control operator to speed up. Sometimes you will see big container ships going through the canal without a tug boat.

The Corinth Canal is not only a major shipping route, but also a huge tourist attraction with thousands of visitors visiting the canal to admire its engineering and construction. The unique design and colorful history of Corinth Canal makes it a famous landmark both in Greece and internationally. Thousands of people see Isthmus from the bridges above, but few get the experience of navigating their own yacht down the Corinth Canal.

The astonishing view of 80 meters high bridges above water makes the site very popular for bungee jumping. Think of it .... as you are crossing the canal with your yacht, people jumping from the bridges to you! 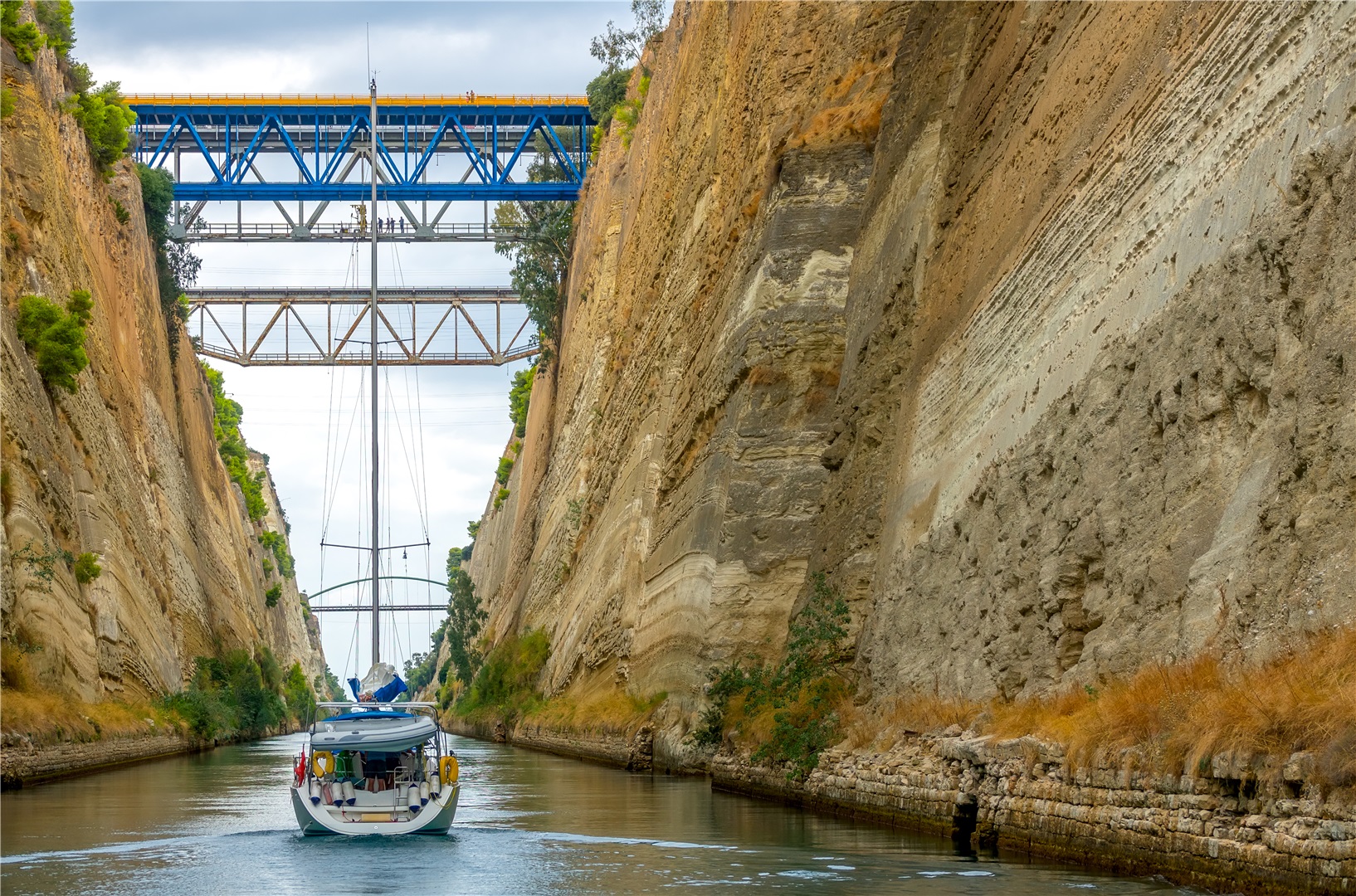 This beautiful city has a picturesque harbor which is built amphitheatrical on a pin covered slope. With beautiful touristy vibes this is one of our favorite haunts during the yachting journey. The city has been modernized in so many ways. It has shops and restaurants on the beach that too maintain the traditional style. It’s Venetian castle is one of the true ornaments of the city.

With golden sand, plane-trees and picturesque taverns the city has everything that you’d look for a great visit during your yachting experience. Head to Monastiraki which is a seaside village. Nafpaktos is a bustling city with all sorts of fun. You will enjoy all sorts of artistic and sports events including ancient drama performances in the magical castle with unique celebration events when the city lights are off and the fire is lit. 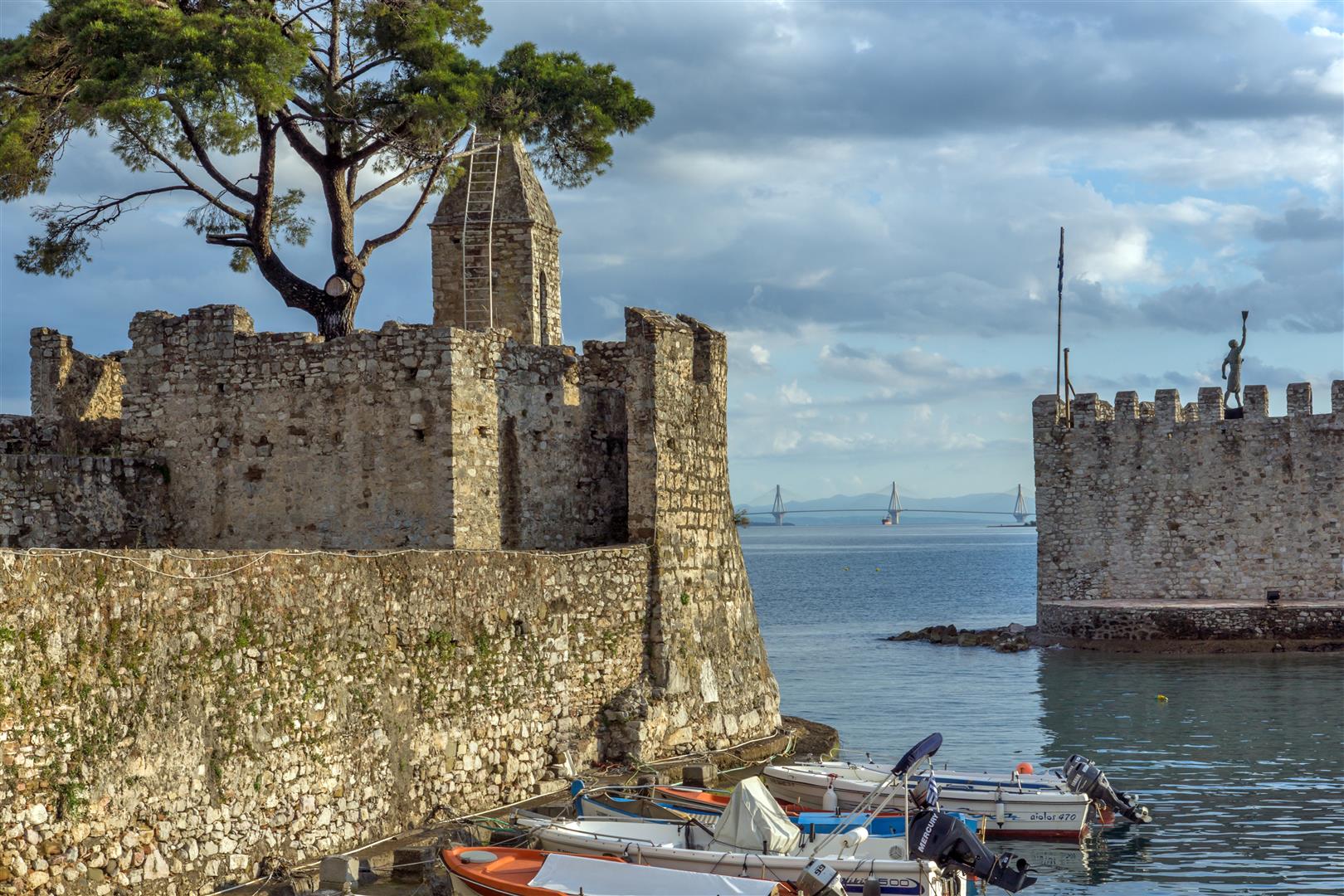 Leave the port of Nafpaktos as the sun shines brighter right on your back.

After 1 hour navigation in Corinth Gulf, the next bridge that comes for crossing is the impressive 2883 meters long bridge of Rio-Antirio, 65 meters above the water line. Crossing the bridge with your own yacht is always an unforgettable experience.

Sailing out early in the morning , will give you an incredible opportunity to make some photographs while sailing under the Rio Antirio bridge that you will cherish for life. A bright morning gives you perfect time to pass through the bridge. You will have a spectacular sailing experience with the impressive image of the bridge overhead.

Sailing under the Rio Antirio Bridge is a dream come true. The bridge was completed after a seven years of construction project and was finally opened in 2004. Rio Antirio Bridge is one of the world's longest multi-span cable-stayed bridges and longest of the fully suspended type which connects Peloponnese peninsula to the Greek mainland.

The bridge has reduced the time spent in crossing the gulf of Corinth from one side to another by car to around 5 minutes which was 45 minutes previously by ferries. On average 10,000 vehicles cross the bridge on a daily basis, some of them heading to the well known destination of Lefkas which is one of the main yacht marina in Ionian sea. 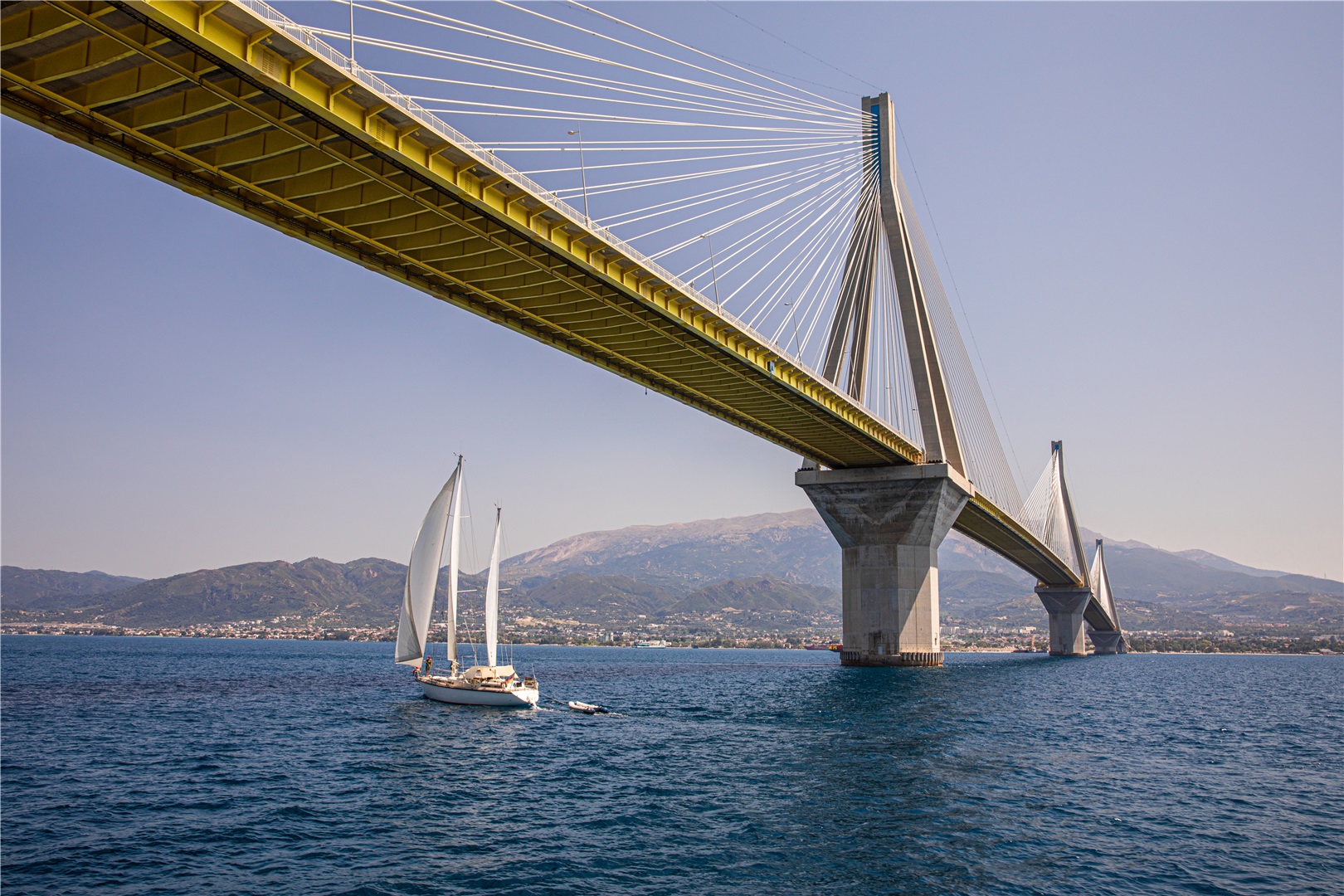 The bridge received the 2006 Outstanding Structure Award from the International Association for Bridge and Structural Engineering. In 2006 the bridge was featured in an
episode of Megastructures on the National Geographic Channel. 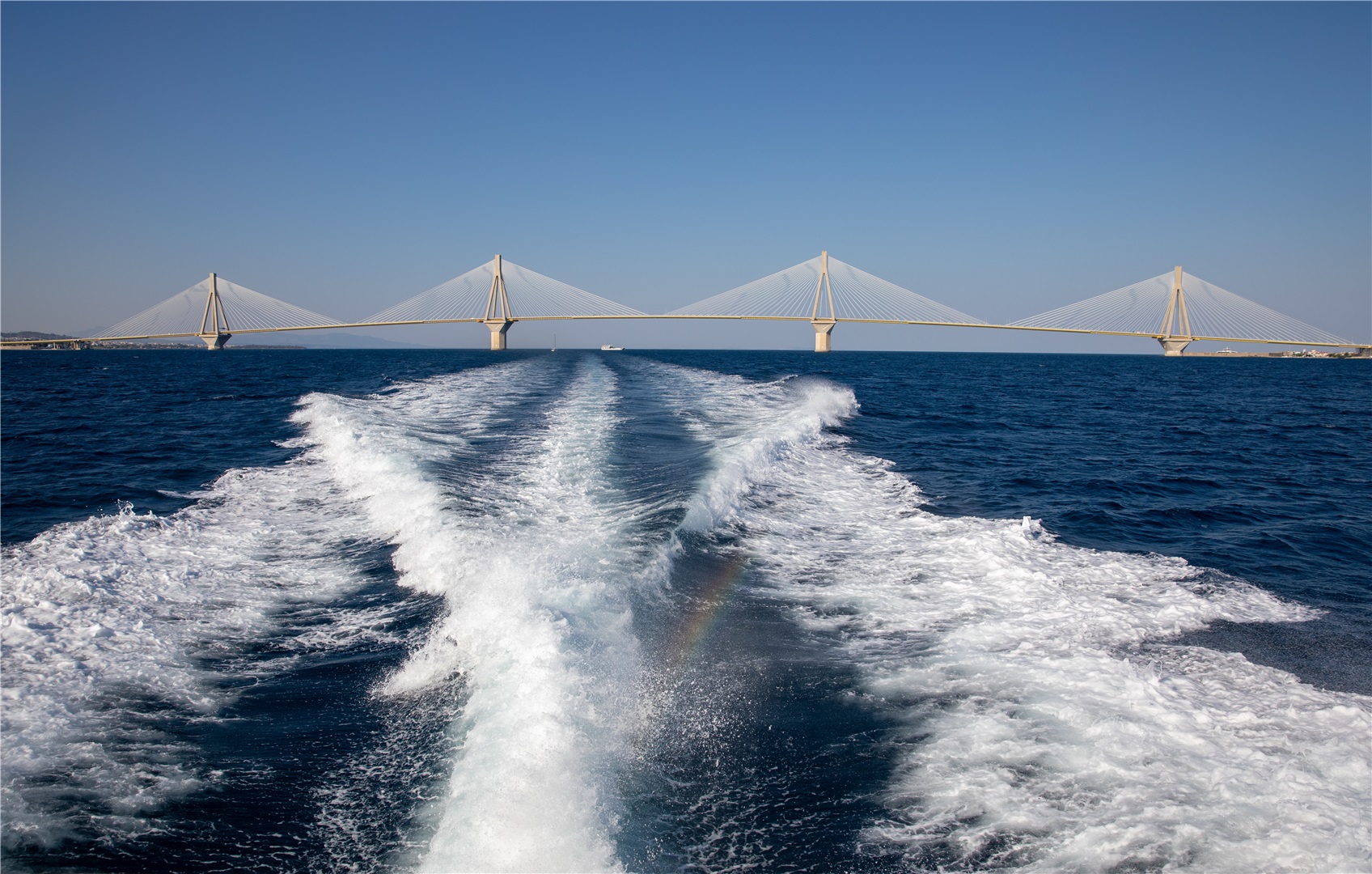 After a voyage of about 30 miles from Rion-Antirion Bridge, Ionian sea starts appearing. Another 30 miles of sailing and you are arrving in Zante ( Zakynthos in Greek) . Zante is one of the most popular tourist destinations with many beautiful spots as well as the world famous and highly recommended bay of Navagio. The beach of Navagio or Shipwreck cave is the well known beach of Zakynthos lying on the western side of the Ionian island. The Shipwreck is one of the most photographed sights in Greece. It is considered as one of the most beautiful beaches in Greece. It was initially called Agios Georgios but owes its new name to the shipwreck of a boat washed ashore. 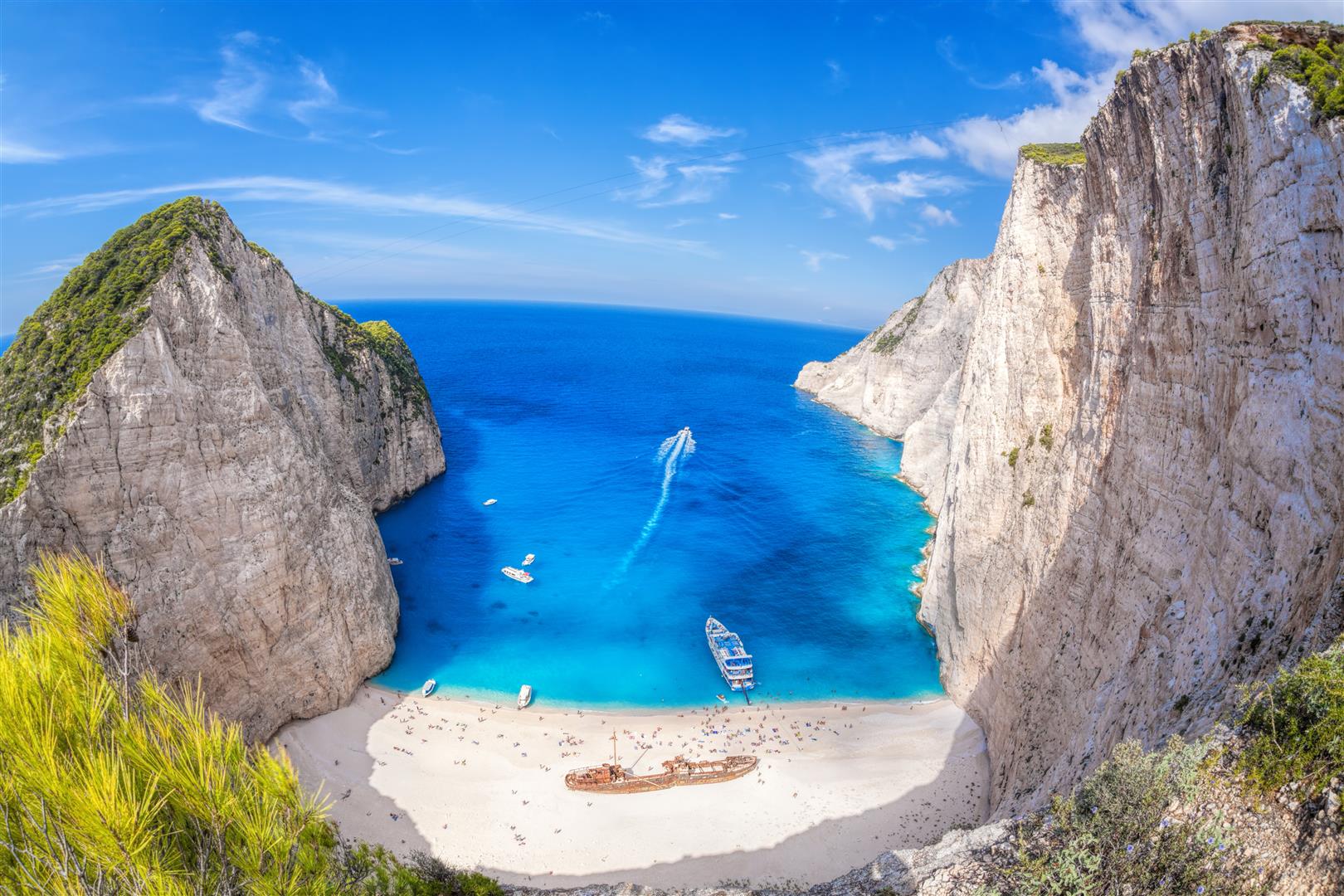 Access to this beach is only possible by means of boats as there is no road connection to this spot. Thus, even though the beach is really crowded when public boats start bringing people in the beach because it is so popular and famous , still there are many hours especially before 10:00 o'clock in the morning and after 18:00 in the afternoon that beach is quiet and you can enjoy total privacy , as crowds are leaving. Crowds are leaving , but you with your yacht ,  can experience the ultimate relaxation and elegance in your private beach of Navagio in Zante!

Lefkas, your final destination is among the famous Greek islands which blend natural beauty and tourist facilities while staying truly untouched.
The location of Lefkas Marina gives returning sailors a great advantage as it's only 50 meters away from the mainland, accessible via a floating bridge, thus giving you easy access from the airport of Aktio or from Athens 357 km away in less than 4 hours’ drive via a modern highway and crossing the astonishing bridge of Rio Antirio which is the bridge already crossed with your yacht during this unforgettable yachting itinerary.
In your final 62 nm sailing to Lefkas marina, before you enter with your yacht in the impressive narrow channel ending into the marina of Lefkas , you can stop to several bigger and smaller islands such as Kefalonia , Ithaka , Kastos, Meganisi or even to the southern beaches of Lefkas island before your final destination of Lefkas city. There are so many unique places to visit. Just have a look to our Ionian sailing itinerary to discover much more incredible destinations in Ionian Sea while sailing with our yachts.